by Sumit Saha a month ago 9 min read

The process of traditional sub-meter reading involves the deployment of trained personnel by the organization to survey every single house and other properties in their list to note down consumption metrics. This data is later aggregated manually and bills prepared to be sent to the respective consumers for further perusal.

A handful of limitations and potential drawbacks to this existing process have a direct impact on cost borne by the organization and level of convenience experienced by the consumer. The following article is about how newer technologies in the domain of Computer Vision and Optical Character Recognition (OCR) can be leveraged to make the process cost-effective and streamlined.

Contemporary challenges and the need for innovation

Sub-metering has been an essential part of utility management through decades to avoid both underestimating and overestimating consumption metrics from electricity meters, water meters, etc. Albeit there have been improvements in Internet of Things (IoT) technologies over the years in the Fourth Industrial Revolution, meter reading has seldom been thought of as priority primarily due to the high robustness of the currently deployed devices across buildings.

Some of the challenges which organizations and consumers regularly experience are as follows:

An aggregate of all the challenges listed above has a direct impact both in terms of costs and convenience. While it need not be necessary to replace installed units with newer ones causing even more delay in regaining costs, the process can be certainly made even more robust in terms of what data is collected and how is it collected.

The process of getting the values from the images of the meter is two-fold. First, we need to detect the areas where the text is and extract the coordinates of the bounding box. This cropped area is then passed through a text recognition algorithm to give us the final output.

Say we have to develop a methodology to read the numbers from the above meter. This means that intuitively, our region of interest is the dark animated area, which implies that the rest of the text is of no use to us. There are two ways to detect whether the area recognized by our algorithm is of interest to us or not - Single Shot Detectors, and Region Based Detectors. We describe three deep learning architectures to accomplish this.

Region Based Detectors first form a set of all probable regions from the given image, and then passes the image through a classifier to figure out whether it contains text or not, or more importantly, the readings. Popular CNN (Convolution Neural Network) based algorithms which follow this methodology are R-CNN, FastR-CNN and FasterR-CNN. They are slower as compared to Single Shot Detectors but gives out results with higher accuracy.

Single Shot Detectors detects the boundary box and classifies the region at the same time. Since, it is a single step process, it is much faster than Region Based Detectors. It must be noted, that Single Shot Detector perform poorly when dealing with small sized objects. Luckily for our case, readings generally have larger fonts as compared to other text on the meter. This way Single Shot Detectors are an idea fit. Popular algorithms which follow this methodology as YOLO (You Only Look Once) and SSD (Single Shot multibox Detector).

While Single Shot and Region Based Detectors deliver good performance with respect to the task of Object Detection, it'd be great to get the best of both worlds by not only receving results at nearly real-time speeds, but also obtain state-of-the-art accuracies while doing so.

EAST detects texts from images and provides geometry and confidence scores for each block of text it detects.

After performing this step, a region of interest for the image above looks something like -

Next step is to detect individual digits from this region of interest. Popular open-source OCR Engines like Tesseract have achieved good results. Another effective deep learning architecture called Convolution Recurrent Neural Network is described below.

The pre-processed image is fed the the network in which the first layer is comprised of a Convolutional Neural Network which divides the image into feature columns, i.e., convolutional feature maps and then fed into a bi-directional LSTM sequence as a feature sequence. This recurrent neural network is responsible for outputting a sequence, intended for finding relations between characters. Finally, the output sequence which now consists of characters which may or may not have significance is passed onto the Transcription Layer, in which these characters are unified using a probabilistic method to extract information from the sequence.

The code snippet below does the two step process using OpenCV and Tesseract.

Pretty cool. But not good enough. As the image above indicates, the extracted portion - 01326 is read as ©1326. What if you could make more accurate models with significantly lesser efforts?

The Nanonets OCR API allows you to build OCR models with ease. You can upload your data, annotate it, set the model to train and wait for getting predictions through a browser-based UI.

Step 2: Get your free API Key

Get your free API Key from https://app.nanonets.com/#/keys

Step 3: Set the API key as an Environment Variable

Note: This generates a MODEL_ID that you need for the next step

Collect the images of the object you want to detect. Once you have dataset ready in folder images (image files), start uploading the dataset.

The model takes ~30 minutes to train. You will get an email once the model is trained. You can check the state of the model using:

Update: We launched a pre-trained model for extracting data from all kinds of meters - digital or non-digital. You can check it out here.

Try out the model or request a demo today! 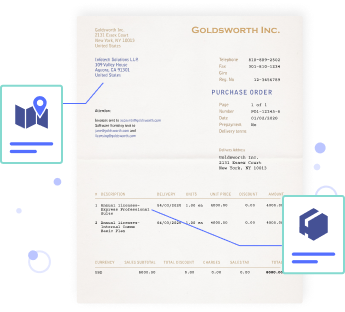 A 2020 Guide To Text Moderation with NLP and Deep Learning

Please enter at least 3 characters 0 Results for your search

May we suggest a tag?